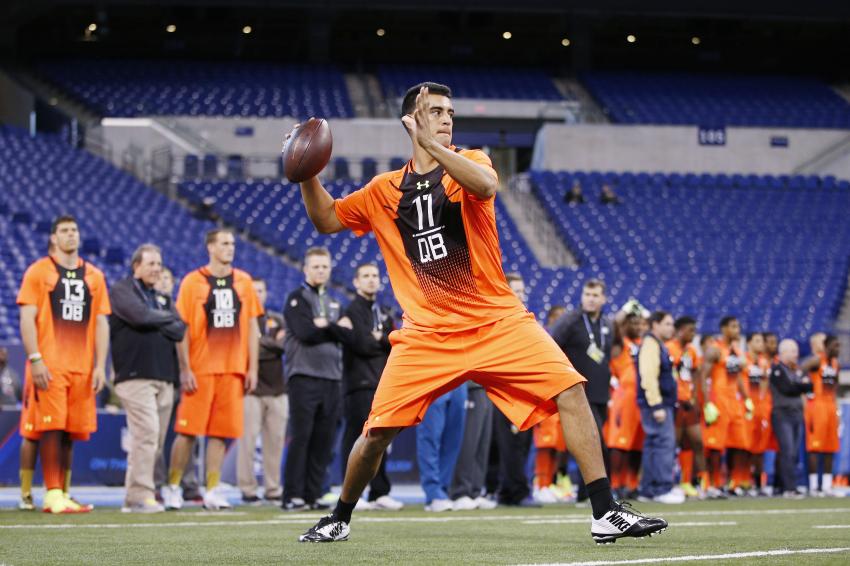 Looking for ‘The Decline of Teamwork in Sports’? Click here!

As soon as the Super Bowl was over, the attention of NFL executives, coaches and fans turned to the second most popular event on the football calendar: the draft.  And the first step in the pre-draft process is the world’s most public job fair, otherwise known as the Combine.  Beginning March 2, hundreds of former college players will gather in Indianapolis to run, jump, lift and be measured in just about every way possible by hundreds of NFL coaches and front office executives.

Of course, beyond the physical evaluations that teams do to assess potential talent, GMs and coaches also conduct interviews and administer psychological tests.  But the first big question that they need to answer is, “what exactly are we looking for?”  I suggest asking three questions that will indicate whether the young men they’re evaluating possess the three required virtues of an ideal team player.  These are questions that, if they had been applied to past draftees, could have helped teams avoid a great deal of pain, criticism, and unnecessary expenditures, and identify players who were much better than their measurables would have suggested.

First, is he humble?  Humility is a tricky word, because most people misunderstand its meaning.  It is not a lack of confidence.

A humble player will be one who knows what his strengths are, and is willing to acknowledge them even if he doesn’t feel the need to do so often.  He’ll also know his weaknesses, and his needs for improvement, and spend more time focused on those.  Players who lack confidence, who are overly deferential and afraid to acknowledge their skills, are not humble.  C.S. Lewis explained this well when he said, “humility is not thinking less of yourself, but rather thinking about yourself less.”

Having said all this, what teams need to avoid most of all are players who are self-promoters, always seeking attention and affirmation.  They will almost always regret taking an ego-driven player, regardless of his level of talent.  Take, Joe Montana over Joe Namath.  Okay, I’m old.  How about Larry Fitzgerald over Dez Bryant, or Nick Foles over Johnny Manziel?

Second, is he hungry?  This is as simple as it is critical.  The fact is, some players get drafted and decide they’ve arrived.  All their hard work has finally paid off.  Other players, the hungry ones, feel more pressure than ever to prove themselves.  They want to get better, and their motivation is about playing the game rather than living the life.

I’ve found that hunger is the hardest of the three virtues to teach.  It seems that it is instilled in most people when they are quite young, often as a result of parenting, or influences from teachers or coaches.  The telling sign of a hungry player is that he is never quite satisfied, and doesn’t have to be reminded to do more.

Think about Jerry Rice and Tom Brady.  Anyone who tells you that they are naturals is mistaken.  No different than the world’s best musicians, doctors or teachers, they simply get more out of what they have because they outwork everyone else.  Period.

Is he smart?  I’m not referring to intellectual capacity here, and I’m certainly not suggesting that teams rely on the Wonderlic test, which is something like an SAT for pro football players.  In the context of a team, being smart is having common sense in the way you deal with people.

A smart player knows how his words and actions affect his teammates.  Whether he is in the huddle, the locker room, or in front of a reporter, he understands the ramifications of his behavior and is intentional about how he influences the people around him.

Players who aren’t smart, even if their intentions are good, often create problems that their coaches and team executives have to clean up.  They create off-the-field distractions, sometimes on the sidelines, that diminish their on-field contributions.

So how does a well-intentioned coach or executive go about discerning which players are humble, hungry and smart?  Of course, interviews are important.  Unfortunately, agents make this a little harder than it once was by hiring consultants to prep their athletes to behave diplomatically.  Still, looking for the right answers to targeted questions is telling.

For instance, ask a player about his accomplishments and look for answers that include the word “we” more than “I.”  Ask him what his coaches and teammates would say about his work ethic, and he’ll be more likely to give you an honest answer, afraid that you might actually ask those coaches and teammates for their opinion.  Ask him about the toughest teammates he had to deal with and how he managed that situation.  When you ask for specifics, you’ll know the difference between generic, rehearsed answers and genuine, detailed ones.

Beyond the interview itself, watch the players when they aren’t being watched.  How do they behave while they’re waiting to run, jump or lift?  How do they interact with others?  Heck, watch them when they check into the hotel and see how they treat the person at the front desk of the hotel, or anyone else they come into contact with.

For all the analysis that goes into evaluating players, and how much time people like Mel Kiper Jr. will spend watching film, it seems like a pretty good idea for teams to increase their focus on the more telling signs about whether a player will actually be someone that coaches will want to coach, and whom players will want to play with.  In the end, there is a good chance that these behavioral qualities will tell you more about a player’s potential than the number of bench presses he can do or the size of his hands.